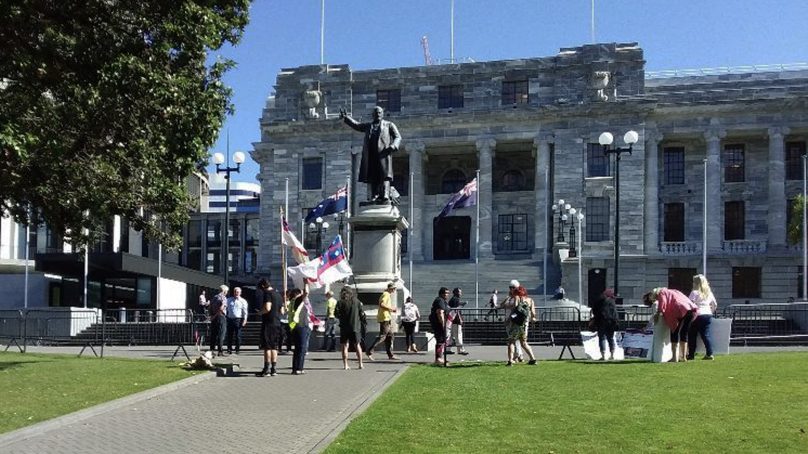 This story was nominated by a community member who published this to thisquality.

OPINION: I attended a gathering in Wellington at Parliament Grounds, on April 8, to hear what was going to be said following an announcement of a High Court Challenge that focuses on impacts regarding circumstances of discretion in selecting the Coronavirus (COVID-19) Vaccine.

I got a ride down from the Kāpiti Coast with a friend. We arrived early, and there were many protests already going on in the city, such as the Evans Bay land dispute.

To obstruct anybody taking it if they disagree after a visit to their GP for further information. I would like to know every detail, whether it has resulted in injustices before I make a judgment. There is no need to enforce it myself by telling others as that infringes their decision to exert the Vaccine.

I support that begetting it should be a personal choice, and that is my value. Where ever it is going to be dished out, people should take it if they feel comfortable. Somebody can object, and they should not be bound to take it any further.

The challenge is to ensure that overcoming the need is not repeated once a decision is made.

Throughout the kaupapa, the whole way through, people attending stayed to hear what two speakers from Nelson had to say. They will speak to one of the submissions in the High Court, as it should be a choice type of thing and not formulated.

I myself am definitely pro-choice, but that should not undermine the Vaccine rollout for the wider population; it is my thought space. Visiting a GP is a great start instead of looking at unofficial sources.

Online it is something that the whole world has to get a grip on because of specific programs and the people who are benefiting. It has a big role to play with what has been put out there, but it is what someone reads and sometimes chooses to believe.

When it comes to freedom of the press, I totally believe any independent media or Government-sponsored newspapers should have that right to go out into the public and talk to people, interview them, get their side of the story and be able to publish it as long as it is not misinformation being spread to undermine the rollout.

The big response? It is quite an in-depth answer because there are many stages.

Still, the first I think is that any media should be able to publish and promote a somewhat unedited side to let the audience decide about the reporting as long as it does not undermine public health measures. If it is a load of rubbish, then that is the decision made, and it should not be made public.

It is something like perception. I think that should be.