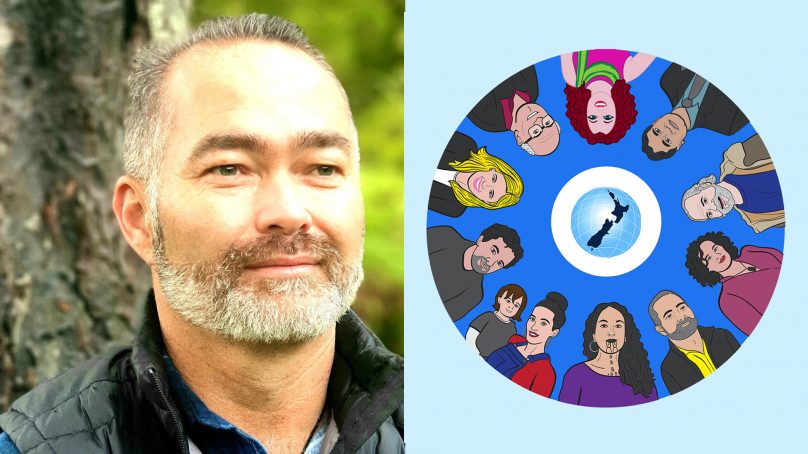 An app commonly promoted by Conspiracy Theorist Billy Te Kahika is posing a serious risk to new users spiralling down rabbit holes when they sign up.

Freedom Village permits users to spread misinformation and disinformation mostly about the Coronavirus Pandemic and how evil Bill Gates is supposed to be. What lies behind it are grifters that are looking to cause therapeutic harm to innocent people and families into believing mistruths.

From anti-5G to QAnon conspiracies, the app has it all in store for many that are convinced to believe false realities compared to the real world.

Google’s Play Store shows a rating of two and a half stars while the Apple App Store has been accompanied with 4.5 stars. On Apple’s Store, the developer name is biofield Medical SL whilst Google’s is Christchurch-based Firehorse Productions Ltd.

It claims to be a social community to ‘Unite Freedom Fighters’ from around the world but precisely, it does the opposite, formulating conspiracy that spreads fear like wildfire.

Background history is hugely shady while there’s little detail about how operations go about.

Back when Mr Kahika abandoned his ‘bogus freedom movement’ to become a fraudulent activist due to losing the 2020 General Election, it was found that asking his followers for money just wasn’t enough.

The Electoral Commission and Police are both actively investigating him over fraudulent money dealings after he’d spent too much by going over the $30k cap breaking the rules.

In regards to the Police involved, an independent investigation done by thisquality revealed over $200,000 was given to him by an investor.

Misinformation being spread has, fortunately, put him into a position of no return. Tech platforms such as Facebook is finally cracking down to remove his closeness.

The alternative was formed by Tiamara Williams and her spouse, behind Freedom Village.

Launched at the end of December 2020, Ms Williams promoted it on a Facebook video.

The app was later promoted by Mr Kahika to over 22k followers as of recent on his Facebook page numerous times in an attempt to escape removal or suspension.

In one video post on the app, Ms Williams tells users to buy an EMF (Electro Magnetic Field) protector plug and 5g protectors to prevent the waves from interfering so anyone who has one could meditate and feel alive in peace without stress. They do absolutely nothing.

“I personally have had the most amazing sleep since I have had one of these. They reverse the electromagnetic field, which does damage to ourselves because it is so close to what our cells are.”

“There are all of these waves in the air and are not doing us any good because they cause inflammation in the body.”

“We’ve got our 5g protectors as well which, I take mine absolutely everywhere, especially if I am going to go out into the public.”

Inside the Terms of Service, it reads that the user must not post the following: “fraudulent, inaccurate or misleading, or is otherwise objectionable content of any kind” — Claims made by a user on the app promotes conspiracies about the September 11 attacks by the Wahhabi terrorist group Al-Qaeda on the morning of Tuesday, September 11, 2001, in the United States.

Another post shows an image claiming light poles that have 5g routers installed on them, including towers, are ‘silent weapons for quiet wars’, including the known conspiracy about chemical trails being another type of ‘silent weapon’ to exterminate humans.

One other post says the Government is using the media to create a world of ‘propaganda’ due to the Coronavirus Pandemic; however, the media has a role in informing its citizens that something is happening and is real to protect and save lives.

More posts by many hundreds of active users on the app seem to post misinformation surrounding COVID-19 and Vaccines, including PCR tests, making inaccurate claims that neither is effective in preventing outbreaks or fighting back against the virus.

thisquality got in touch with a media contact from the Government’s Unite Against COVID-19 Group, including other departments, to raise concerns about the app that is being used to lure genuine people down endless rabbit holes.

A comment from a spokesperson says society needs to build awareness about untruths and strengthen resilience to it.

“Everyone has a responsibility to prevent mis/disinformation, including Government agencies, academia and the media,” they’d said to thisquality.

“Any communications about the Vaccine should come from reliable sources such as the Unite Against COVID-19 website and the Ministry of Health.”

Other contacted departments suggested reporting all misinformation posted online to CERT NZ as they manage any predicaments like this one.

Suppose people are concerned about Vaccines and do have questions about them. In that case, they are recommended to talk to their local GP and not use ‘research’ from unreliable and unofficial sources or apps, which could potentially cause more harm than good.

If you are writing about the so called misinformation that other people are discussing, then i would like to ask you to actually prove these so called conspiracy theories wrong. How do YOU KNOW that what Billy and people that use the Freedom Village app talk about and say is actually misinformation??? Im amazed at the majority of people these days just believe what they see and hear through main stream media. Do you think its possible that these pharmaceutical companies would do anything to protect their ridiculously huge annual profits????? GREED is the worst human trait of all and people that earn the sort of money that these people do just want more and the big Pharmas put profits before actually curing illness.
These companies are in the business of DISEASES and making sure their profits go up every year,
They charge insane prices for these drugs. Correct me if im wrong but NONE of them actually CURE anyone they either deal with the illness by just masking the symptoms until you end up needing another one of their magical pills because you now have another problem, OR they posion you so much that you go into remission (but really you are now just a secondary cancer time bomb ).
Do you know about the studies they do for their drugs and vaccines? They are funded by the companies that have a financial interest in these things getting approved.
One last thing….
Back in my day we used to have chicken pox parties etc as kids to get a virus so we could then fight it off naturally and we then would have produced our own antibodies , therefore have an immunity to the virus. This is the idea behind vaccines……….. SOOOOOOO why would you not just continue to do it this way and not put unknown toxins and preservatives into your bloodstream. When you get a vaccine your body goes into a toxin/viral overload, as this is not the normal (Mother Nature, GOD , evolutionary) way that our bodies and built to deal with these viruses.
They make the virus in a lab which is the first thing that is wrong, they then have to add these horrible ingrediants in the vaccine to keep in alive . If they say that vaccines are to create antibodies to a virus, then why not just do it they way nature intended it to happen. That way the big Pharmas wont be able to make money off this disgusting ritual. That is why they push them so much because if they let nature work then they dont make a profit.
Nature is the best way to get a stronger immune system. BUT you do have to help your body by way of boosting your own immune system and making it strong.

WHAT HAPPENED TO FREEDOM OF SPEECH.
EVERY SINGLE PERSON IN THIS WORLD, EVEN YOU, HAVE A RIGHT TO THINK FOR YOURSELF AND HAVE YOUR OWN OPINIONS. SINCE WHEN DID HAVING DIFFERENT VIEWS, IDEAS OR THOUGHTS EQUAL CONSPIRACY THEORY.?????
IF YOU DONT LIKE WHAT BILLY HAS TO SAY THEN DONT LISTEN ITS THAT SIMPLE. IM SO SICK OF THIS COUNTRY AND WORLD TALKING ABOUT MISINFORMATION TO A POINT WHERE YOU GET RIDICULED FOR SPEAKING. I HAVE DONE RESEARCH INTO VACCINES AS WELL AND THIS WAS BEFORE COVID . IF YOU READ BOOKS THAT ARE AGAINST VACCINES, THE BOOKS THAT ARE SCIENTIFIC BASED AND BACKED AND HAVE EVIDENCE THAT SHOW THE TERRIBLE SIDE EFFECTS AND DEATHS AND THE BIASED STUDIES THAT ARE DONE THEN YOU MAY AHVE A DIFFERENT OPINION.. THERE ARE COMPANIES THAT WILL DO STUDIES AND IF THE OUTCOME IS NOT IN THEIR FAVOUR THEY WILL THEN GO TO ANOTHER RESEARCH COMPANY AND DO ANOTHER STUDY UNTIL THEY GET A STUDY WHERE THE RESULTS SHOW THE DRUG FAVOURABLY . iF YOU THINK THAT DOES NOT HAPPEN THEN THATS A BIT NAIVE , BUT DO SOME MORE RESEARCH BEFORE YOU GO CALLING PEOPLE FRAUDULENT AS UNLESS THAT IS A LEGAL FACT THEN THAT IS DEFORMATION OF CHARACTER.

Simple and wonderful, what we need is thousands more like you.

I am curious to know who wrote this. I had heard nothing from Mr. Hudson from last December, when I donated, until a day or so ago when he sent me an email inviting me to donate again. What does that tell you? His website, when you click on “CORONAVIRUS” seems to contain nothing but “the official government line.” https://thisquality.com/category/coronavirus/ I wonder why there is nothing like this **** or this **** or this**** The website claims “Quality News, real stories” Hmmmmmmm and anonymous opinion pieces it would seem. Needless to say, I won’t be making any more donations

Is this a parody piece? I mean, like the kind of thing you would find in The Onion? I really hope it is. I would would hate to think that such wickedness, or such extreme dull-headedness, was a reality.