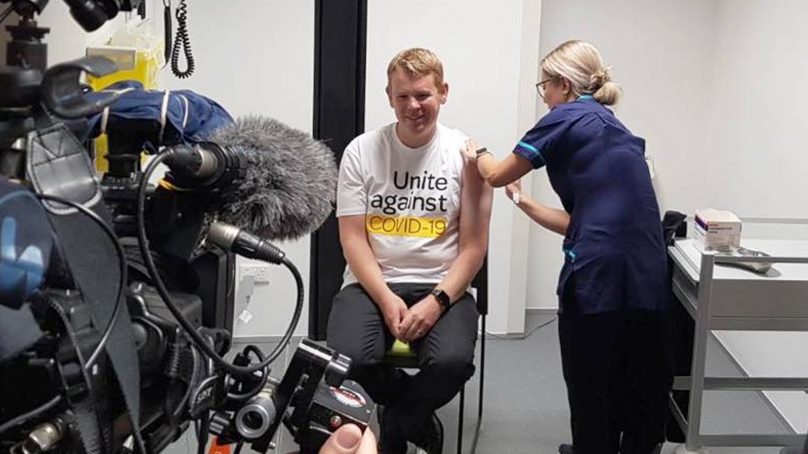 COVID-19 Response Minister Chris Hipkins has received the COVID-19 jab. Associate Health Minister Ayesha Verrall who was in the same room received it too.

In a Facebook post, he mentioned that this is his first dose which will in-hopes gain courage for others to take it.

“This morning, I had my first dose of the Pfizer COVID-19 vaccine in front of the nation’s media,” said Minister Hipkins.

Mainstream media attended to document the history taking place to improve public confidence about Vaccines, especially the Pfizer/BioNTech Vaccine which has a 95% efficiency rate.

Health Ministers and spokespeople watched as it happened. Minister Hipkins added that other parties would be getting it.

“Health ministers and spokespeople from other parties will be doing so over the next few weeks alongside our health and border workers,” said Minister Hipkins.

“Vaccines will be available for everyone from the middle of the year. It’s safe and effective, and it didn’t hurt a bit!.”

Minister Ayesha Verrall says she was pleased to report that she feels one hundred percent after receiving the jab.

“I got my first shot of the Pfizer COVID-19 vaccine with Chris Hipkins MP today,” said Minister Verrall.

“We’ve begun vaccinating health workers now and we will be rolling out more widely in the coming months.”

Prime Minister Jacinda Ardern is set to receive the COVID-19 vaccination by going hard and early to show leadership during the middle of the year before the public get to have it.

According to the AM Show on March 1, Ardern said she would receive the vaccine before the general population at around mid-2021.

“I’ll do it publicly, and for those interested, they can watch it. I’ve been really mindful of not taking a vaccine from someone else for who it’s really critical for. There are people who are at risk and I’m not one of them,” PM Ardern said.

“I do want to demonstrate that it’s not only safe to take at the time but long term it’s safe, and so I will do it early on before we start the mass rollout.”

Alert Level 1: PREVENT
*All of New Zealand
*The button below directs to Government Unite Against COVID-19 website.

Ministry of Health acknowledges protocols in place for arrivals from India