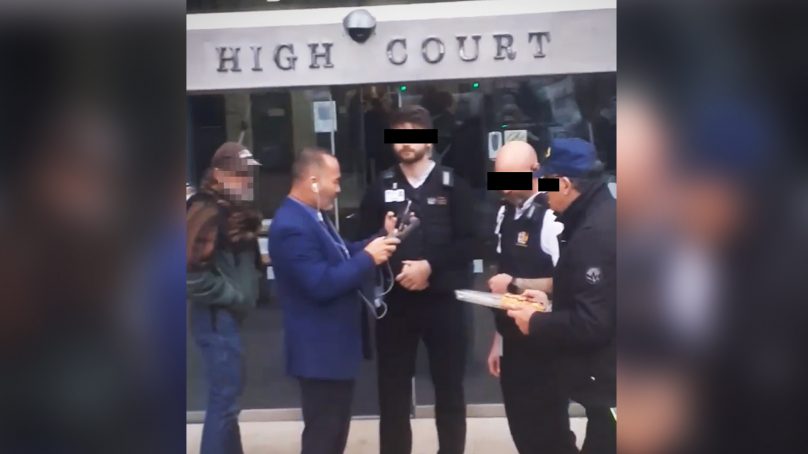 Conspiracy Theorist Billy Te Kahika was kicked out of Wellington’s High Court on Wednesday morning for breaking rules in the courthouse waiting room.

A legal challenge at the Court was commenced by lawyer Sue Grey. It is an attempt to ‘try and halt’ the Government’s Covid-19 Pandemic response, including Vaccine rollout, but hopes are not specifically high.

After an unsuccessful attempt to gather people at Parliament, Mr Kahika arrived at around 9am outside the Court, filming what looked to be primarily followers of Ms Grey instead of his ‘bogus freedom’ supporters.

Roughly fifteen minutes later, he went through a security checkpoint inside and was likely directed to sign a paper that states rules and obligations to follow, such as no filming inside.

Even though the paper was seemingly thought to be signed with his initials, he starts live streaming to his Facebook page. Around one hundred people watched him attempt to be sneaky and act like he was not filming, clearly stating it is not allowed.

“I’m not meant to be filming,” he said. “I just want to give you a sneaky glimpse of how many people are here.”

“Not meant to be filming, but I am anyway because I’m just that sorta guy.”

Reportedly, Mr Kahika took photos of himself with the lawyer, backing his tracks by saying he was filming inside while waiting for the courtroom to open, adding that the security guard said to him while entering that he should not.

Shortly before 10am he was kicked out by security for refusing to comply with general instructions within the buildings.

Rules of the Courts Security Act 1999 gives security members powers to deny entry or remove a person from the Court if they suspect someone is significantly disrupting, or will significantly disrupt a proceeding, the administration of a Court, or the conduct of lawful activities in a Court.

Mr Kahika was given a second chance to enter without acting to do so repeatedly, which goes under consequences of denial of entry or removal from Court as a decision and satisfaction that a person will not behave in the way they did again.

Instead, he defended after being kicked out but was directed to leave the grounds; furthermore told not to go back again.

According to Justice New Zealand’s In-Court Media Coverage Guidelines of 2016, photographing or filming is prohibited unless an application for permission has been approved through the registrar of a specific Court that is concerned.

“If you want to film or record proceedings in Court for publication or broadcast or wish to photograph a Court in session, you must apply through the registrar of the Court concerned, in accordance with the following guidelines and on the prescribed application form,” it reads.

“Whenever authority is granted to media to cover a hearing, permission is given on the basis that the conditions imposed are minimum conditions. All matters relating to in-Court media coverage are at the discretion of the Court.”

“A media applicant and anybody acting on their behalf (such as journalists, camera operators, sound technicians or photographers) must ensure that they follow the conditions imposed.”