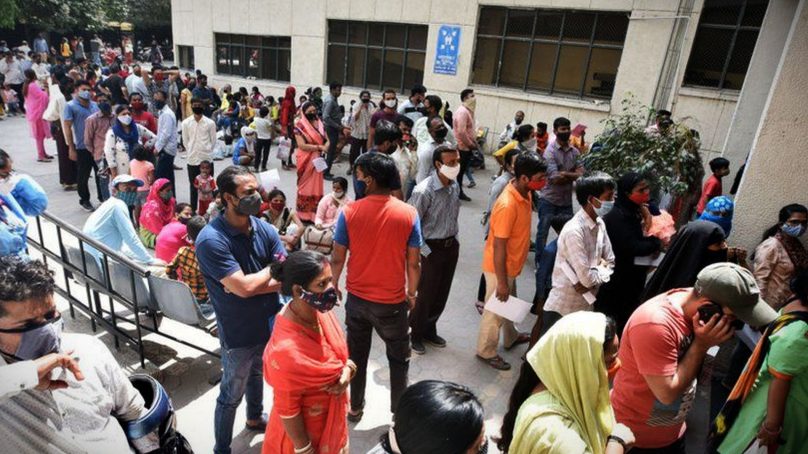 The motive to save lives has put stress on its Hospitals, following a record 34,9691 cases on Sunday, which brings the total to around 17 million since the Pandemic began.

Because of this, crowds of people congregating inside Hospitals have been turned away due to insufficient oxygen supply.

Particularly in the capital of Delhi, where the situation is most acute, death has spread fast due to the lax of oxygen.

Deaths across India went up by a staggering number of 2,767 within the 24 hours to Sunday — it sets the highest daily number so far as one in three people are testing positive in Delhi.

At breaking point, Hospitals in the area have warned that intensive care units are full, and there’s just no more room for any more beds.

The Indian Government deployed trains and the air force to transport supplies to the hard-hit areas most struck by the ‘life or death’ situation for many who have gasped for supply.

Crematoriums in the area have also been overwhelmed.

Bodies can be seen being burnt on the pavement on the outskirts of the capital.

Earlier in the year the Indian Government believed that the virus was beaten due to cases falling to around 11,000 by mid-February.

According to the Health Minister, vaccines were distributed, which they’d claimed to be an ‘endgame’ of the deadly Pandemic. New cases surged since then.

Cases have risen so quickly that nothing to fight it is keeping up. New variants have also been emerging due to mass gatherings such as the Kumbh Mela festival that drew millions of pilgrims earlier in the month.

Eight new Covid-19 cases in MIQ, none in Community