Today in Parliament, the House had a special form of debate where members discussed local issues.

Labour MP Greg O’Connor said in his speech about the Te Ara Tapua and mentioned that this would make a legal connection of the 16km of his electorate, Ohariu; for the Coastline to be legally accessible. Currently, it is not at the moment.

ACT MP Nicole Mckee talked about the chaotic roadworks in the Rongotai Electorate, with both routes to the Airport backed up with roadworks. Fortunately, the one that really took the cake on constant misinformation was MP for Hutt South Ginny Anderson.

MP Ginny talked about how Lower Hutt needs a flyer bus connection re-established to the Airport, she mentioned how Ratepayers of Lower Hutt are paying for the service and that it is unfair because it is only available to Wellington City. The problem; Airport Flyers’ was one of the few commercial services under the PTOM model.

She further mentions it was PTOM that introduced the removal of the service because it lead to the race at the bottom of wages, mentioning that contract providers would be able to cherry-pick services they only want for commercial purposes while the rest were to get landed with a public subsidy. Failing to mention a previous public transport operating model, where each bus service effectively had its own contract.

Steven Joyce introduced reforms in 2013 to reduce amounts of public subsidy and public transport contracts with Block contracting. Before emphasising Block contracting with what happened in 2010 within the Hutt Public Transport Bus Contract.

When the Hutt went out to tender in 2010, NZBUS, who was the incumbent operator put out an offer to Greater Wellington Regional Council to run the 110 services (Upper Hutt to Petone), 120 (Stokes Valley to Lower Hutt) and 81/83/84/85 (Eastbourne to Courtenay Place) services commercial with the rest of the Hutt service top be subsidized service. Commercial services are where the aid is funded by fares only and doesn’t receive a ratepayers topup.

Before the July 15th Bus Changes which was under the New PTOM operating model, the contract was subsidised plus fare revenue was collected. Since July 2018, the services have moved to fix flat rate block contracting. This was an example here by what MP Ginny was fretting about as described in her speech.

PTOM block contracting is where bus routes contract of multiple routes where they are tendered out in 1 contract, in the Hutt Valley there is 4 PTOM bus contracts.

The Upper Hutt contract block as an example consists of:

Prior to PTOM 110; it was commercial and the rest were subsidized but with a block contract. If someone wanted the 110, they would have to take all the service or none. This contract block has been awarded to Tranzurban after tender.

Prior to the July 15th Changes the Airport Flyer operated commercially (not rate payer funded) from Wellington Airport to Queensgate. Still, with the changes, and with NZBUS contract reduction, not having anymore Hutt Valley services, NZBUS wanted to pull back their commercial service to Wellington Station. 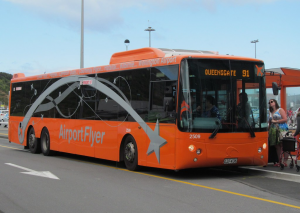 After campaigning from both MP Ginny Anderson and National MP Chris Bishop, they convince NZBUS to continue running the commercially funded service. Since then NZBUS made the commercial decision to remove snapper from the service, opting for a mobile EFTPOS machine model instead.

Hutt Users complained to their local MP’s to bring back the snapper, a condition NZBUS was not obliged to do since it was a commercial service. Passenger numbers started reducing with NZBUS reporting not many people from the Hutt actually caught the service from Queensgate to the Airport.

With COVID-19 hitting in March of 2020, NZBUS suspended all services as it was the only service that the government didn’t top-up via Waka Kotahi for free public transport. When services resumed NZBUS made the commercial decision to only run the service from their Wellington Station to the Airport and cut ties off from the unprofitable section, Queensgate to Wellington Station. 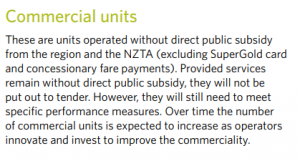 Here is a description of a commercial PTOM unit, which the Airport Flyer operates on. in November 2020, NZBUS notified Wellington International Airport and Greater Wellington Regional Council that they will no longer be operating the service.

At this point, GW would be allowed to take over the service.

A full list of PTOM details from Waka Kotahi is supplied here.

The result of the speech from MP Ginny is below:
* Ginny fretting about an operating model where contractors would be able to cherry-pick services for commercial use and which ones got the full subsidies, something PTOM quashed with block contracting, by making bus routes available in a contract block, removing the commercial/subsidy cherry-picking operators were able to do pre-PTOM.
*Alleged claiming that ratepayers money was put into a service that actually never received a dime for it. Something that might suit the plan but isn’t true to the extent that it should not be said as fact in the house when it isn’t.
* Mentioning people from Wainuiomata having to make the potential for 4 transfers to get to the airport becoming very difficult for those with Disabilities. The inconvenience caused mentioned especially for those of a disabled community.
* Finally, the speech was cut off for being out of order by Speaker Trevor Mallard for going away from the local issue that the AIRPORT FLYER to PTOM DRIVING DOWN WAGES was on a National Level.

PTOM has had many flaws in it, like the intended purpose of the ACT was to increase commercial services that have led to a reduction in commercial service and increased public subsidy. Still, these issues Ginny bewailed about are no consequence of the ACT and have been in place long before PTOM legislation was created.

Thanks for Reading,
Authored by Sam Somers.