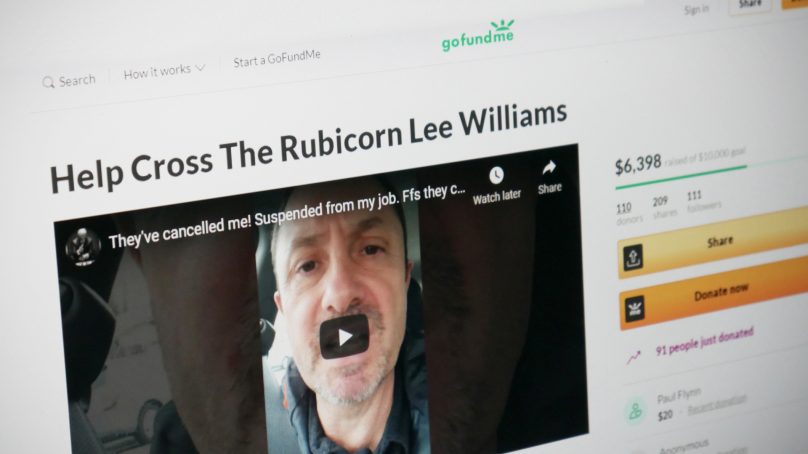 Around $6,400 ($6,398) was raised before a campaign created by Michael Allen advocating funds to Mr Williams on GoFundMe was abruptly removed after a number of complaints were sent in.

Givealittle which is a New Zealand-based fundraising platform also removed a campaign created to raise funds for him.

Mr Williams released a video to his YouTube channel on Tuesday afternoon saying that the GoFundMe campaign made by Mike Allen was stopped — further mentioning in the title that he is ‘devastated’ that around $7,000 vanished in seconds.

“Bad news I’m afraid. I’ve just had a phone call from Mike Allen who set up a GoFundMe site for me to raise some cash because I am being persecuted by the Government of New Zealand and the Māori Party and full-on left-wing activists who are the street-foot soldiers for [Prime Minister] Jacinda Ardern,” he said.

“It had seven thousand dollars in that account, and GoFundMe has gone and cancelled it because I broke the conditions.”

“What an absolute disgrace.” — adding that the platform will be refunding everyone who donated to the campaign within thirty days time.

Mr Williams is known as a white supremacist who posts content online spreading made-up realities about the Christchurch March 15 terror attacks in 2019 and even anti-Chinese, Māori and immigrant observations.

A Change org petition was set up to get him dismissed from Synlait, which employs him, receiving over seven thousand signatures after he’d posted content online mocking Māori people, culture, heritage and history; including the Māori Party Co-leader Rawiri Waititi.

Because of the petition and a large amount of outrage shared to Synlait’s social media page, they later suspended him for around three weeks to investigate his online actions.

The call has been strong to cancel him for his actions; while accusations continue claiming the Māori Party is behind it — they are not.

GoFundMe and Givealittle did not immediately respond for comment upon deadline.

I don’t know much about Lee Williams. But to be honest I don’t believe in co-governance either. It is setting up a two tier society. I do like MMP and this is where a party can influence. But otherwise New Zealand is everyone’s today. There are white kids walking to school without shoes too ( of course no kids should be without these basics white or Maori ). There are plenty of white folk in jail ( over 50 per cent ) so I don’t know why some think that Maori are getting unfairly treated. The health of many white New Zealanders is a joke. I’m white. Never been rich. We’ve got Maori in our family. I’ve got nephews that are half and half. I enocourage them to learn about both cultures. We teach them a work ethic. And to not expect handouts but rather to respect yourself. Education is a must for every kid. White or Maori. So I’m not buying in to the rhetoric that Jacinda is spreading. White priviledge only describes some white folk not all. As for racism. It’s not racism we should be worried about but rather prejudice. And I think we’re pretty good in ol NZ. A lot of Maori are wealthy so the opportunity is there.

Lee Williams is not a white supremacist. Your comments are slanderous and downright disgusting as you have failed to do your own investigations.

Williams and many others like him are anti racist as they strongly oppose the apartheid agenda of He Puapua, if you watched his YouTube videos you would understand that He Puapua is an undertaking for co governance agenda by radical tribalists and the UN. Jacinda kept this under wraps from the General public because she knew of the backlash that would occur if the document was made public. Judith Collins has called her out on it.

Again I am really dismayed and angry at your lack of intelligent journalism.