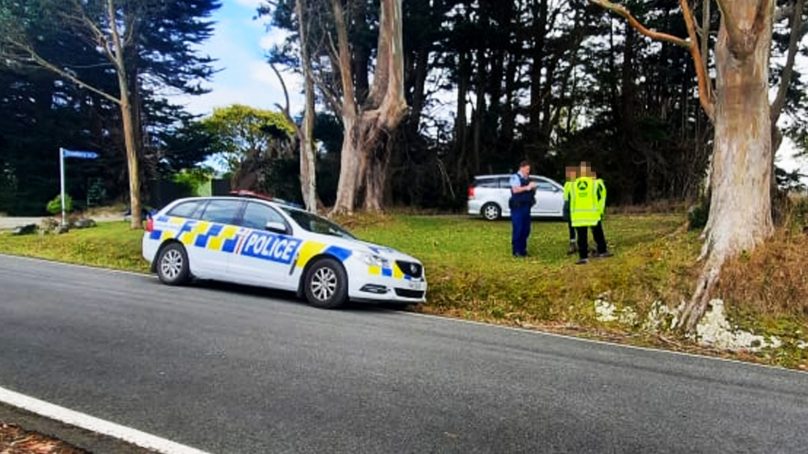 OSPRI Contractors attempted to lay poisons on land near Sawyers Bay in Dunedin. Arriving at around 9:40 am on Monday morning, they were denied access to enter the land.

Landowner Adrian Black sent his concerns to thisquality and has trespassed them from entering his property.

It was said that the contractors come with a security member in accompany for interrogation purposes as they have attempted to enter three other times without permission from Adrian to lay traps and shoot kill.

Four Police units were called at the scene after they’d been infringed from entering. Around 15 locals supported Adrian in defence that OSPRI has rushed communication without proper consultation and assertation that what they were doing would not be acceptable by himself and all landowners in the surrounding area.

Josie Harris, attending the scene, said to thisquality that they had successfully prevented them from entering the land in protest that a Kaka was poisoned during 2019 on the land by OSPRI.

“We’ve got three of the gates covered. OSPRI turned up at two of the gates. We’ve stopped them from entering the property,” she said.

“Adrian is a private property landowner, and they first approached him about the same time as the Kaka was poisoned from their operations during 2019. They poisoned a few Kaka as they ran into the bait stations before they died.”

The bait stations were implemented before three or four Kaka had been killed. The Kaka did not die on Adrians’ land specifically, but they had occasionally flown through his property.

It has raised concerns as most landowners do not want the bait stations implemented on their land.

“They approached him to pest control his property. He asked them if he could do it himself, but James Horton, who works with OSPRI, said he had no faith in him pest controlling his own property, and they would continue with their operations,” said Josie Harris.

“He’s been having ongoing issues with them, including, he asked for an extensive OIA (Official Information Act) request, received on Friday. It only answered some of his questions; only a third of it was answered with no working days to consult that legally with anyone.”

Adrian says he thinks they felt a rushed need to invade his property to carry out pest control measures, following many questions being asked first through an OIA before any operation should have happened. The OIA was sent on March 16, asking questions of public interest regarding their determination to enter the land. It was received on Friday, April 9, which left no time for rapprochement or reflection.

“The latest one, I sent, they replied to on Friday saying they would invade my property straight away. They have answered some questions, but they typically did not answer all of them,” said Adrian Black.

“Let me highlight a few things; question, how many possums have OSPRI injected with bovine TB were released into the wild. The answer, two hundred and ninety-nine. Half in the North Island and South Island approximately over 18 years, since 2003.”

OSPRI had infected 299 possums, and out of 92,536 caught and checked for bovine TB, 114 were found to have it — “That means OSPRI is the primary cause of TB in possums. In fact, not only the primary cause, they are the only cause. If possums were catching TB from cows, thousands would be infected. Certainly not a third of what they have infected with TB,” said Adrian Black.

The taxpayer foots a large sum of $24m every year on top of $36m from the farming levvy to eradicate TB from possums, but it shows no evidence of transmission to a cow.

When Adrian asked for sufficient evidence that possums gave TB to cows, they could not supply it to him.

“They said there is no proof that this has ever happened. They are not providing evidence that there is a clear and imminent threat to New Zealand from my property,” said Adrian Black.

“I think landowners in New Zealand should have their rights protected, and rouge companies should not be able to invade without due course. In this case, a company that is tasked with eradicating TB should not be spreading it around.”

“The new Zealand Government needs to investigate whether people are paying around eight hundred thousand dollars per cow infected with TB. There is a total overspend as cows are only worth one thousand dollars each; it is time somebody applies logic to the situation.”

Police escorted the OSPRI contractors away after locals protesting disagreed with them entering the land.

Adrian is scheduled to have a meeting with them at their Dunedin office later in the week.

If you can donate to these guys the seem to be on to it!!

We had a fantastic victory today. It felt good to watch the Police and Ospri and their Security leave. It’s not over but we definitely came out on top today. Thanks to the rest of the Team that were there.

Well done guys – we must protect our rights at all costs – these *** think they can walk all over people and their rights ospri should be in jail for ********** the environment for the deliberate spreading of tb go create profit and work for themselves – they have proven themselves to be as nasty as the poison they lay. A registered charity for goodness sake-making millions off the taxpayer and not paying any tax – so corrupt

Poorly written article full of misinformation and if Jossie is involved, they would be deliberately misleading lies