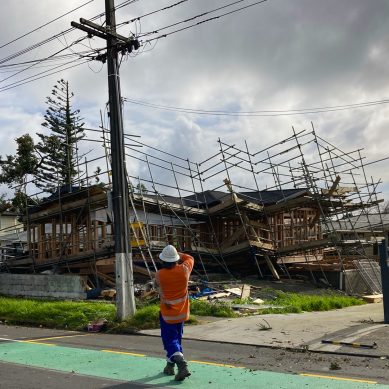 On May 30th 2020, a man named Brandon Mccormick appeared in multiple social media videos that were uploaded to twitter showed him wielding a bow and arrow and pointing at various people, the bow and arrow were loaded and was ready to fire.

A woman filming that goes by the Twitter @Gingersonfire said in her video to the man, “you call yourself an American?”

Right after, the man wielding a bow and arrow yelled out “yes, I’m American! ALL LIVES MATTER!”

Before the woman filming could continue her conversation to try to calm the heat down, the man starts pointing his bow and arrow at surrounding people.

The woman yells “DON’T YOU DARE!” as the man continued to point his arrow at people as if he’s going to shoot it at any time.

A black man who is unidentifiable, as of writing this, tried to stop the man from firing his bow and arrow at innocent peaceful protestors, as he attempts too, the man with the bow and arrow fired his shot. Still, he luckily missed his shot against the black man trying to try and stop him.

Protestors started to notice that this man was a threat to others and quickly assembled to stop him in a massive maul that resulted in a car being flipped, Brandon Mccormick owned that.

Brandon Mccormick went onto a fox 13 live interview after he’d been mauled by protestors, “Well first I got beat up when I yelled all lives matter, then I pulled out weapons, and I got beat up some more, and then the cops grabbed me and my car got totalled. My phone, everything, I lost everything coming down here trying to protect them with what weapons I had.”

The interviewer asks if the police come to rescue him as he was getting mauled by a large group of protestors,

“finally, but I lost my car, I lost my phone. I saw my car on fire, so it’s totalled. And everything I had, I probably had about a thousand dollars worth of stuff. I don’t know if my car got turned over, but it got totalled.”

The correspondent then gets asked by one of the newsroom ladies over the mic to ask if Brandon Mccormick was in the car when the protestors approached him and tried to flip his car over.

“I don’t know if they turned it over or not, they beat me up, and the cops came and got me. But yes, and they torched it.”

He then gets asked by the correspondent how he got hurt on his forehead,

“Two black African Americans, they beat me through my open window as I yelled all lives matter.”

Brandon Mccormick made up the whole story on live T.V that he was inside his car as he got attacked, but video evidence clearly shows he wasn’t.

Protests are happening all over the U.S because a Police officer murdered a black man named George Floyd by kneeling on his kneck for about 8.5 minutes.

For 8.5 minutes the Police officer never removed his knee from George Floyd’s airway so he could breathe. George Floyd passes away shortly after.

After George Floyd’s passing, protests had formed all over the U.S calling for the end to police brutality & racism.

The Police officer was fired and then three days later charged with third-degree murder.

American attorney Michael O. Freeman said in a media statement provided by thesun on the situation of the charges.

“he has been charged with third-degree murder, and we are in the process of continuing to review the evidence that there may be subsequent charges later. I must say that this case has moved with extraordinary speed, this… conduct, this criminal action took place on Monday evening May 25th memorial day, and I’m speaking to you at 1:00 pm on Friday, May 29th, that’s less than 4 days. That’s extraordinary.”

“We have never charged a case in that kind of time-frame, and we can only charge a case when we have sufficient admissible evidence to prove a case with reasonable doubt. As of right now, we have that”

“We have the citizens cameras and video, the horrible terrific thing we have seen over and over again. We have the officer’s body-worn cameras, and we have statements from some witnesses, we have a preliminary report from the medical examiner. We have discussions with an expert. All of that has come together, so we felt in our professional judgement; it was time to charge, and we have so done.”

A journalist asked American attorney Michael O. Freeman if public outrage played a role in the speed of the investigation.

“I am not insensitive to what’s happened in the streets, my own home has been picketed regularly, my job is to do it only when we have sufficient evidence, we have it today,” said American attorney Michael O. Freeman