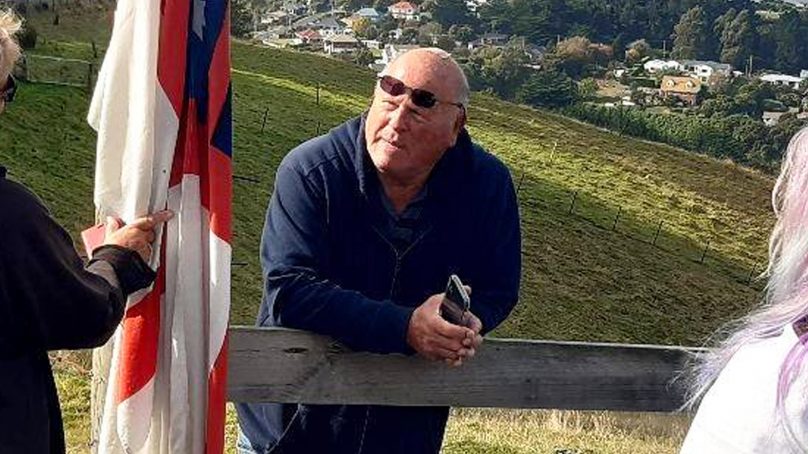 Following an attempt on Monday morning to enter land near Sawyers Bay owned by Dunedin Resident Adrian Black, two OSPRI Contractors were told not to enter after rushed communication occurred before carrying out pest control tasks that were not consulted.

The contractors arrived at around 9:40 am with a security member. They were later escorted out by Police, who were called to the scene after about 15 locals attended in protest, supporting Adrian, warning that they could not enter over Official Information Act request concerns.

Adrian wants answers following a meeting planned to happen at the OSPRI Dunedin office on April 16 at 2 pm that was later canned.

A layer was invited by Adrian to mediate the meeting. They were put on a call with Police attending the scene, telling them that the OSPRI contractors had to stand down so they could travel to Dunedin to attend the meeting.

An email to the lawyer in a chain said it would not go ahead out of concern for their staff’s safety. Their office would also close down for that day.

thisquality followed up with Adrian where he says he wants the problems they are causing for him to come to an end.

“I would very much like to bring this episode to an end and not have them perpetuate the situation or allow it to drag on longer than necessary. I do not know why they cancelled,” said Adrian.

“During mid-August of 2020, they asked to meet me, and I welcomed them into my home. I gave them drinks, and we had a good chat.” — General Manager of Southern South OSPRI Vivian Larson and assistant Jennifer Lawn attended.

During 2019 three to four Kaka were unfortunately killed from poisons laid out in bait stations by OSPRI on the surrounding land. Since then, they have caused trouble entering Adrians’ land three times without permission or prior consultation to carry out tasks such as laying traps and shooting kill.

James Horton, who works with OSPRI, made allegations that he had ‘no faith’ in Adrian to conduct his own pest control procedures on his land, and they would continue to carry on with their operations despite neglected negotiations and communication.

A thorough OIA (Official Information Act) request was sent on March 16 containing seventy-four questions of public interest to prove assurance that their operation made sense before anything would happen on the land. The response was received on Friday, but Adrian was told that OSPRI would visit him on Monday.

It left no time for review and reflection to reply over the weekend, including no working days to consult with a lawyer or legal entity legally.

Adrian does not want OSPRI to carry out an operation on his land because questions of concern were not answered in his OIA request.

“[the lawyer] spoke to the officer for ten minutes roughly on the phone, and after that, I noticed that phone was then passed over to the two contractors. My lawyer raised concerns with them. They negotiated a standdown that they would leave the scene on the condition that they and I attended a meeting at their office in Dunedin on Friday at 2 pm,” said Adrian.

“OSPRI backed off on Monday. They told her in an email that they cancelled the meeting on Friday and would close their offices.”

“How I feel about this; my solicitor is coming down from Nelson to attend a meeting with them and me on Friday. Having committed coming here, they then cancelled that meeting without consulting us.”

“I want them to leave me alone. They have no reason to commit nuisance or harassment.”

thisquality thoroughly scanned the OIA reply received. A response to one question affirmed that 299 possums were infected by OSPRI, and out of 92,536 that were caught and checked for bovine TB, there was 114 out of the total found to have it.

In defence of not allowing the operation to happen, Adrian recollected on Monday, that he does not believe his property or land poses an imminent threat to the wider New Zealand for the very reason that they have caused a greater problem by not providing evidence that possums give cows bovine TB.

“Let me highlight a few things; question, how many possums have OSPRI injected with bovine TB were released into the wild. The answer, two hundred and ninety-nine. Half in the North Island and South Island approximately over 18 years, since 2003,” he said to thisquality on Monday.

“They said there is no proof that this has ever happened. They are not providing evidence that there is a clear and imminent threat to New Zealand from my property.”

Adrian added that the news outlets who produced a story about the incident that happened on Monday, such as the Otago Daily Times and NZ Herald, undermined what he was saying while being interviewed in a video.

He said information regarding the OIA was sent to those responsible for covering the story to correct it with what was said in the response.

“Taxpayers have been funding the spread of TB by the company tasked with eliminating TB in cattle, according to an admission by the company in an OIA response received on 9th April 2021,” said Adrian in an email.

“There are a few factual inaccuracies in the article they wrote about the attempted access of my property and land on Monday.”